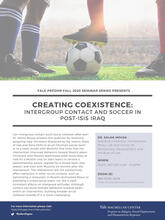 Can intergroup contact build social cohesion after war? Dr. Salma Mousa answers this question by randomly assigning Iraqi Christians displaced by the Islamic State of Iraq and Syria (ISIS) to an all-Christian soccer team or to a team mixed with Muslims. She finds that the intervention improved behaviors toward Muslim peers: Christians with Muslim teammates were more likely to vote for a Muslim (not on their team) to receive a sportsmanship award, register for a mixed team next season, and train with Muslims six months after the intervention. The intervention did not substantially affect behaviors in other social contexts, such as patronizing a restaurant in Muslim-dominated Mosul or attending a mixed social event, nor did it yield consistent effects on intergroup attitudes. Although contact can build tolerant behaviors towards peers within an intervention, building broader social cohesion outside of it is more challenging. This work has been recently published in Science: https://science.sciencemag.org/content/369/6505/866

Salma Mousa is a post-doctoral fellow at the Immigration Policy Lab and also at the Center for Democracy, Development, and the Rule of Law both at Stanford University. As an Egyptian raised in Saudi Arabia, the UAE, Qatar, and Canada, social cohesion has fascinated Dr. Mousa as a concept, process, and outcome.

Her work has been supported by the U.S. Institute of Peace, the Abdul Latif Jameel Poverty Action Lab (J-PAL), Innovations for Poverty Action (IPA), the Program on Governance and Local Development, and Stanford’s Immigration Policy Lab, McCoy Center for Ethics in Society, Center for Philanthropy and Civil Society, Center on International Conflict and Negotiation, Freeman Spogli Institute, Abbasi Program on Islamic Studies, and King Center on Global Development.