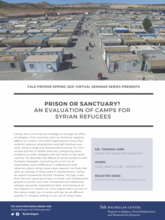 Camps are a controversial strategy to manage an inﬂux of refugees. Host countries want to minimize negative eﬀects on citizens, but relief organizations worry that isolation reduces employment and self-reliance over time. Using a large and representative survey, Dr. Ginn studies Syrians in Jordan and Iraq, comparing camp residents to other refugees who self-settle in the same country. He identifies the eﬀects of camp residence with multiple strategies: controlling for a rich set of observables, and a diﬀerence-in-diﬀerences with Lebanon where camps were never opened. He ﬁnds that, after an average of three years in displacement, camps do reduce household income; however, the gap is less than the rent saved by living in a camp, and employment growth is similar over time. Combined with additional refugee outcomes, expenditure data, and literature on the impacts on citizens, Dr. Ginn argues that a version of the camp model can, in some settings, be an eﬃcient subsidy to refugees willing to opt out of urban areas.

Dr. Thomas Ginn is a research fellow at the Center for Global Development (CGD), where he’s part of the Migration, Displacement, and Humanitarian Policy team. His current research asks how to design policy and allocate assistance to benefit refugees and host communities alike. His research on the Middle East examines the trade-offs of camps and of opening schools to refugees. In randomized controlled trials in East Africa, he is studying how livelihoods programs can improve both economic outcomes and social cohesion. And as a principal investigator of the Let Them Work initiative, he is studying how refugees’ labor market access affects host community attitudes and levels of humanitarian assistance. Prior to joining CGD, Dr. Ginn worked with the World Bank on a survey of Syrian refugees in Lebanon, Jordan, and Iraqi Kurdistan and with Innovations for Poverty Action in Kenya. He received his PhD in economics from Stanford University, and his bachelor’s degree from the University of North Carolina at Chapel Hill.