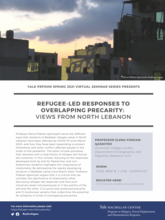 Professor Elena Fiddian-Qasmiyeh traces the different ways that residents of Baddawi refugee camp in North Lebanon have been affected by COVID-19 since March 2020, and how they have been responding to protect themselves and other conflict-affected people in the midst of the pandemic. The latter include processes that resonate with a long history of refugee-led mutual aid initiatives. Focusing on the responses developed both by and for Palestinian and non-Palestinian residents highlights the importance of relationality, which in this context encompasses relationships between different groups of refugees (including Palestinians and Syrians) in the camp, but also the relationship between local level responses and diverse local, national and international structures of inequality, exclusion and marginalisation. By delineating the rapidly developing situation in Baddawi camp since March 2020, Professor Fiddian-Qasmiyeh argues that it is critical that we consider the significance of relationality when discussing refugee-led responses and how such initiatives relate simultaneously to 1) the politics of the self and the other, 2) to politically-produced precarity, and 3) multiscalar systems that undermine the potential for solidarity in times of overlapping precarities.
Elena Fiddian-Qasmiyeh is Professor in Migration and Refugee Studies at the Geography Department at University College London (UCL) in the United Kingdom. She is the Co-Director of the UCL-Migration Research Unit and is the Founder and Director of the Institute of Advanced Studies ‘Refuge in a Moving World’ research network across UCL. She is currently the Principal Investigator of the four-year AHRC-ESRC-funded ‘Local Community Experiences of Displacement from Syria’, the five-year European Research Council project ‘Analysing South-South Humanitarian Responses to Displacement from Syria’, and a three-year project funded by the British Council-USA entitled ‘Religion and Social Justice for Refugees’. Professor Fiddian-Qasmiyeh is also Co-Investigator on the AHRC Network Plus programme, ‘Imagining Futures through [Un]Archived Pasts’, where she is jointly leading the Baddawi Camp Lab. She is External Affiliate Convenor of the South-South Forum at Dartmouth College, and Honorary Senior Research Fellow at the University of Exeter.
Professor Fiddian-Qasmiyeh research focuses on the intersections between gender, generation and religion in contexts of conflict-induced displacement, with a particular focus on the Middle East and North Africa. She has conducted extensive research in refugee camps and urban areas including in Algeria, Cuba, Egypt, France, Jordan, Lebanon, South Africa, Syria, Sweden, and the UK. Drawing on a critical theoretical perspective her work contributes to key debates surrounding refugees’ experiences of conflict-induced displacement, the nature of refugee-donor relations, and both North-South and South-South humanitarian responses to forced migration. Her current research examines Southern actors’ responses to displacement from Syria, including responses developed by local host communities and refugees themselves.