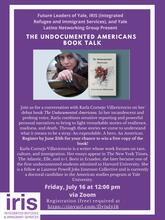 Join the Future Leaders of Yale, Yale Latino Networking Group, and Integrated Refugee & Immigrant Services, for our next immigration series event. We will be joined by Karla Cornejo Villavicencio to discuss her book The Undocumented Americans. As one of the first undocumented immigrants to graduate from Harvard University, Karla reveals the hidden lives of her fellow undocumented Americans in this deeply personal and groundbreaking portrait of a nation. Register by Friday, June 25th for your chance to win a free copy of the book!

In her incandescent, relentlessly probing voice, Karla Cornejo Villavicencio combines sensitive reporting and powerful personal narratives to bring to light remarkable stories of resilience, madness, and death. Through these stories we come to understand what it truly means to be a stray. An expendable. A hero. An American.

Karla Cornejo Villavicencio is a writer whose work, which focuses on race, culture, and immigration, has appeared in The New York Times, The Atlantic, Vogue, Elle, The New Republic, The Daily Beast, n+1, The New Inquiry, and Interview magazine. Born in Ecuador, she later became one of the first undocumented students admitted to Harvard University. She is a fellow at Laurene Powell Jobs Emerson Collective and is currently a doctoral candidate in the American studies program at Yale University.