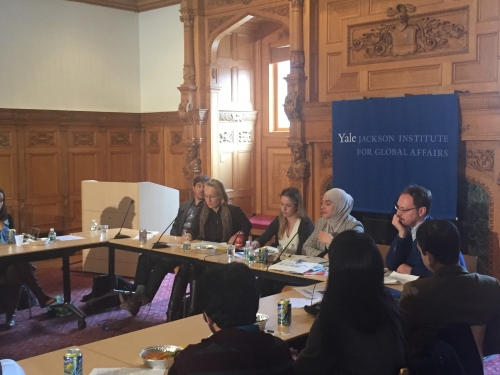 The Macmillan Center’s newest initiative, the Program on Refugees, Forced Displacement, and Humanitarian Responses hosted a panel on Social Innovation and Humanitarian Responses on February 22 (view video). It featured Peter Ventevogel, a senior mental health expert at UNHCR (The UN Refugee Agency); Rana Dajani, Associate Professor of Biology at Hashemite University in Jordan and founding director of We Love Reading; and Stephanie Leutert, a Mexico Security Initiative Fellow at the Robert S. Strauss Center for International Security and Law at the University of Texas. Jon Kurtz, the Director for Research and Learning at Mercy Corps, served as the discussant, and the panel was chaired by Catherine Panter-Brick, Professor of Anthropology, Health, and Global Affairs at Yale.

Professor Panter-Brick opened the panel by welcoming the three panelists and outlining the purpose of the panel.

“I want to be clear about what humanitarians do. They save lives, they alleviate suffering, and they rebuild lives,” she said.

She then turned to the panelists, who she termed “modern-day humanitarians.” Each panelist was asked to take about fifteen minutes to discuss their experiences and plans to create innovative solutions to aid displaced peoples and refugees.

Mr. Ventevogel began the discussion by speaking about his work with the mental health of refugees. He identified three “take-home messages.”

His first was that “the mental health problems of refugees are much broader than post-traumatic stress disorder.” The second, and related, was that “the response to mental health problems of refugees, consequently, should also be multifaceted – with different layers.” His third message was that such a multifaceted response is not possible “by only using a service provision model. We need also to build on the existing strengths…particularly on strengths already within refugee communities.”

Mr. Ventevogel then said that the mental health spectrum is much broader than only trauma-related issues. There are three broad categories, he said: “contextually generated emotional distress,” which is not a disorder, “common mental disorders” – which includes PTSD, depression, and anxiety, and “people with severe mental disorders,” such as substance abuse. He suggested that the tendency for mental health professionals to focus on past experiences isn’t always helpful.

“If you talk about the experience of refugees, most are worried about the here and now,” he said. He recommended that the first thing to do is to repair social support mechanisms and the social fabric – something that, he said, has a lot of attention in the humanitarian community, but not as much in the mental health community. He concluded by saying that any health program without a mental health component is not acceptable.

“As a scientist…I’ve been involved in assessing different humanitarian programs,” she said, “and I think the scientific rigor coming from that has allowed me to advise other humanitarian programs that they must involve scientists to study and assess your programs, because most of these programs are actually developed in an office somewhere very far from a culture or a country or a local context.’”

She said that humanitarians need to use scientists from the beginning of the process to determine before implementation whether programs will be helpful.

Professor Dajani next spoke about the flaws in Western conceptions of how to help refugees.

“We should trust the people [the refugees] themselves to come up with solutions to the challenges they face, because they know better what has gone wrong,” she said. “They can put their finger on exactly the reason and the roots of the challenges they’re facing, and thus they can develop better solutions.”

She offered the example of her organization, We Love Reading, which encourages parents to read aloud to children. She said that Westerners think that the reason that people in her communities don’t read is because they don’t have enough books, so Western organizations send thousands of donated books. But instead, she says, the reason is that people aren’t reading aloud to their children. She created and tested this model in her local community over three years.

“This is human-centric design, or organic development of a solution,” she said.

This form of innovation and solution-making also “inadvertently creates solutions for other things in the community,” she said. Her organization, We Love Reading, has become a space for adults to learn how to become social entrepreneurs, and a place for parents and children to escape the stress of refugee camps, she said.

Lastly, she advocated for the benefits of encouraging volunteer work rather than paying community members to do the work of an organization. She said that volunteering brings community engagement back to humanity rather than money, and that it encourages people to be more invested in their communities and prepares them to become leaders.

Stephanie Leutert was the final panelist and she spoke about innovation in providing aid to Central American refugees.

Her remarks focused on CARA, an organization that provides legal assistance to asylum seekers who have been detained at the border. They have created a new model for providing pro bono assistance that flies in volunteers on a weekly basis, she said, and it has been immensely successful – reducing the number of deportations from 50% to around 4%.

She gave three reasons why this model was more successful than traditional models of pro bono legal provision. The first is that week-long volunteer stints help avoid the burnout that comes when lawyers volunteer for months on end. The second is that the center keeps a database of volunteers.

“After volunteers leave, they help from afar to make sure nobody is slipping through,” she said. This nationwide network of lawyers can help asylum seekers with their cases remotely. The third reason Leutert gave for the success of the CARA model is that everyone is added to a listserv that has thousands of members. This listserv has been used to facilitate an organized legal response to issues that come up unexpectedly – most recently, getting lawyers to airports to aid refugees affected by President Trump’s travel ban.

The panel concluded with brief remarks from Kurtz and a discussion session that included audience members.