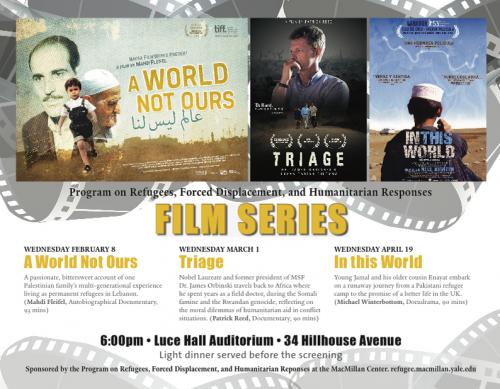 The Program on Refugees, Forced Displacement, and Humanitarian Responses at the MacMillan Center Film Series presents a spring film series focusing on refugee stories from around the globe.

A passionate, bittersweet account of one Palestinian family’s multi-generational experience living as permanent refugees in Lebanon.

Nobel Laureate and former president of MSF Dr. James Orbinski travels back to Africa where he spent years as a field doctor, during the Somali famine and the Rwandan genocide, reflecting on the moral dilemmas of humanitarian aid in conflict situations.

Young Jamal and his older cousin Enayat embark on a runaway journey from a Pakistani refugee camp to the promise of a better life in the UK.