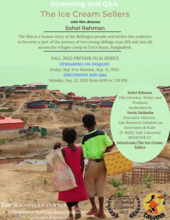 Movie screening Friday, September 9th, 2022 to Monday, September 12th, 2022 (on-demand; 75mn) followed by Q&A session on Monday, September 12th, 2022
The film The Ice Cream Sellers (2021, 75mn) is a human story of the Rohingya people - ‘the most persecuted minority in the world’ according to the former United Nations High Commissioner for Human Rights Zeid Ra’ad Al Hussein - who fled from Myanmar into Bangladesh after ‘a textbook example of ethnic cleansing’. The film invites the audience to become a part of the journey of two young siblings Ayas (10) and Asia (8) across the refugee camp in Cox’s Bazar, Bangladesh, just as the director himself was invited and received intimate access into their journey of life. The director takes the audience around the incredibly hot, dusty camp that stretches as far as the eye can see. The film portrays a story of tragedy and loss, courage and suffering in the attempt by the two siblings to earn enough money to bribe officials for the release of their father from prison in Myanmar. The Ice Cream Sellers is a timely, relevant and significant film, especially as it gives an insightful context to the Rohingya refugee community and their lives in Bangladesh, five years on from the onslaught of violence they experienced in August 2017.
Sohel Rahman is an award-winning filmmaker, writer, and producer based in Lisbon, Portugal. His films have been screened internationally in various film festivals and universities around the world. Sohel received the best feature documentary film award from South Asian Film Festival of Montreal, Canada in 2021, and from Tasveer South Asian film Festival, Seattle in 2021 for his film The Ice Cream Sellers (2021). He also received the best film award from Lusofona University, Lisbon in 2015 for his film A Passagem (2014). In the same year, he won the Special Jury Award at the Encontros International Cinema de Vienna Film Festival in Portugal.
Born in Chittagong, Bangladesh, Sohel’s love of visual art, literature, and storytelling drew him to filmmaking early in life. Sohel teaches film in different universities and institutes in Portugal and Bangladesh as an invited filmmaker. He is the director and chief organizer of Mostra de Cinema sul Asiatico, Lisbon, Portugal.
Speaker:
Sohel Rahman – filmmaker, writer and producer
Moderator:
Neela Saldanha, Executive Director, Yale Research Initiative on Innovation & Scale (Y-RISE), Yale University