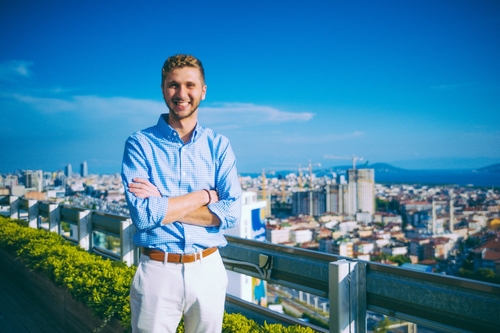 Jude Alawa, who is graduating this month with a B.A. in Global Affairs and Molecular, Cellular, and Developmental Biology will be heading to the University of Cambridge, England, in the fall to begin his Fox International Fellowship and Rotary Scholarship. He recently published an article in the Journal of Cancer Education. The paper, titled “Cancer Awareness and Barriers to Medical Treatment Among Syrian Refugees and Lebanese Citizens in Lebanon(link is external),” draws from research conducted by Alawa over the past two years under the supervision of Kaveh Khoshnood, Associate Professor at the Yale School of Public Health. To fund his research, Alawa was awarded a Libby Rouse Fund for Peace Fellowship through the Council on Middle East Studies. The MacMillan Center sat down with him to talk about his project and future plans. What follows is an edited version of that conversation.

How did you come to take on this project?

Two summers ago, I worked for the Council on Foreign Relations in Washington, D.C., under Thomas Bollyky. During my first day on the job, he encouraged me to take on an independent research project outside of the work that I was doing for him. He said it would be a meaningful experience to do it in a policy setting. I am originally from Syria and I’ve always had an interest in refugee health. I’ve been working on refugee health issues, especially humanitarian ones, since high school. I found that there was very little literature on the emerging epidemic of chronic illness among refugees and decided to write about the lack of attention dedicated toward treating these conditions. I was very fortunate to have the paper published in Foreign Affairs(link is external).

Following my time at the Council on Foreign Relations, I connected with Professor Kaveh Khoshnood from the Yale School of Public Health, and we decided to address the growing concerns about chronic illness among displaced populations in the Middle East, specifically in Lebanon.

How did you do the research?

Since cancer is becoming one of the most prevalent chronic illnesses among refugees and displaced populations, we decided to focus on it. There was essentially no data available for the Lebanese population and the displaced Syrian refugee population in Lebanon on cancer awareness and their barriers to healthcare. It is well-established that the level of cancer knowledge is a large predictor of treatment outcomes for patients suffering from cancer. We used a validated survey tool called the Cancer Awareness Measure that takes 15 to 20 minutes to complete, and it addresses a participant’s knowledge of cancer symptoms, risk factors, awareness of different indications, and barriers to seeking medical attention. It also has a section that looks at demographic factors. We administered that survey to more than 400 Syrian refugees and more than 300 Lebanese citizens. As a result, we were able to put together a representative sample of what cancer awareness looks like in urban areas for the displaced Syrian population in Lebanon and for the Lebanese population.

What did you find?

We went in initially thinking that Syrian refugees would have a lower level of cancer awareness compared to the host population, the Lebanese citizens, and that they would have greater barriers to medical care. However, what became quickly apparent to us was that this was not the case. We found that both the Syrian refugee population and the Lebanese citizen population have extremely low levels of cancer awareness and significant barriers to care. Both are reporting significant barriers and such low awareness that it questions whether this is an issue with the humanitarian system, or whether it’s an issue with the Lebanese health care system as a whole.

Did you experience anything that you weren’t expecting while you were working on the project?

I didn’t realize how fearful many Syrians were of interacting with Lebanese authorities and physicians because they don’t have legal status within the country. I noticed the change in demeanor when they were speaking to someone like a person of authority in the hospital that was Lebanese. When I came in and they heard me speak a Syrian dialect, their whole demeanor changed. It was much more welcoming. They were much more willing to express things to me that they hadn’t to others.

I also was surprised at the love and hope that filled people’s hearts as opposed to hatred and other things that can come along with such hardship. Even after telling me a difficult story rife with suffering, they would emphasize that they were still grateful that they were alive and that they were going to make the most of what they have. That was really inspiring.

What are your next steps?

When I was in the region doing the surveys, I was also meeting with administrators from a variety of clinics and humanitarian organizations. Our goal is to promote cancer prevention within the region. We’re going to start with developing a cancer education curriculum to improve cancer awareness in clinics. Our goal is to incorporate it into primary care. We want patients to be given valuable information about their health and to be directed to the resources that will improve cancer knowledge and care-seeking behavior. By the end of this summer, we’ll have a curriculum developed that will be given out to patients.

What else needs to be done?

The next steps will show that the current humanitarian system needs to change to address long-term conflicts and chronic health concerns. The Syrian conflict is well into its eighth year now, and there needs to be more research that addresses health conditions among displaced populations that require long-term access to specialist care and treatment. Our findings suggest that the Lebanese healthcare system as a whole is extremely fragmented and isn’t capable of delivering adequate health services to its entire population. Therefore, there needs to be a massive influx of resources for us to see improvements in that area, especially for cancer treatment.