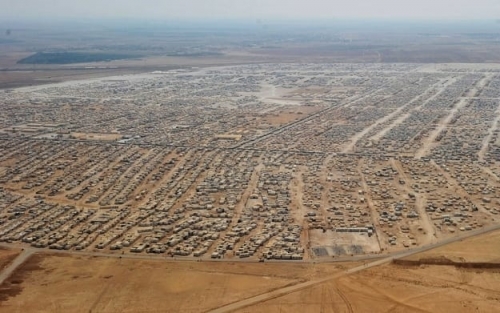 Since the outbreak of civil war in 2011, over five million Syrians have left their homes seeking asylum in the nearby countries of the Middle East and North Africa (MENA). Jordan has absorbed hundreds of thousands of Syrians in this period, placing a huge burden on not only those displaced, but also on host communities and the Jordanian government.

To explore this issue, the Council on Middle East Studies (CMES) at the MacMillan Center at Yale hosted a panel on April 5 entitled “Syrian Refugee Crisis: Ground Realities and Humanitarian Responses in Jordan.” (view video) In addition to CMES, the panel was co-sponsored by the Center for the Study of Race, Indigeneity, and Transnational Migration (RITM), and the MacMillan Center’s Program on Refugees, Forced Migration, and Humanitarian Responses. The panel was moderated by Frank Griffel, Professor of Religious Studies and Chair of CMES, with panelists including Naysan Adlparvar, Postdoctoral Fellow and Lecturer at CMES; Stephen Allen, Team Lead in USAID’s Syria Disaster Assistance Response Team; and Michael Callan, Chief Analyst for the MENA Region in the Government of Canada’s Privy Council Office.

After an introduction by Griffel, Adlparvar provided some background on the scale of the refugee crisis. Indicating that Jordan has absorbed 657,621 registered Syrian refugees since the onset of the crisis, Adlparvar equated this to, “the United States absorbing 23 million refugees in the span of about three years.” He also emphasized the distribution of refugees, “with 21.4 percent of Syrian refugees in camps and the balance of 78.6 percent in host communities.” Talking to the different sets of challenges this distribution of refugees has created, Adlparvar explained that the first is related to establishing camps and providing shelter, water, and sanitation, as well as education and health services. “There are also challenges around access to education and health… and rising housing prices,” he added, referring to problems in host communities. He went on to say, “this has begun to stoke tensions between host communities and Syrians… even violence. There are questions about sustainability. There are even measures underway to manage those tensions.”

Following on from Adlparvar’s background information, Allen highlighted that most of the refugees displaced into Jordan came from the southwest of Syria, particularly Dara’a Governorate. He then went on to discuss Za’atari Camp, the largest camp in Jordan, located in the north of the country. Za’atari is currently home to around 70,000 refugees, although approximately 400,000 Syrians have passed through the facility. Reflecting on an ongoing debate on whether to tackle large scale displacement using a camp or host community-based approach, Allen discussed in detail some of the positive and negative aspects of supporting refugees through Za’atari Camp.

Closing his presentation, Allen outlined the U.S. government’s (USG) response to the Syria Crisis. The Office of Foreign Disaster Assistance (OFDA), operationalized through a Syria Disaster Assistance Response Team (DART) co-located in Jordan and Turkey works, primarily, to address humanitarian needs within Syria. This includes 13.5 million people in need (80 percent of the country’s population), of which seven million are unable to meet their basic food needs. The USG—as the largest humanitarian donor to Syria—has contributed $6.5 billion to this end. Regarding Jordan, he added, “… the total USG assistance in Jordan [is] almost a billion dollars over the course of the crisis. This is separate to the USG’s normal funding to Jordan.”

Callan then opened his presentation with a general description of the pros and cons of the international humanitarian system. In summary, he noted, the global humanitarian system “is fast but inefficient; it can adapt but only to a short-term planning horizon; it’s autonomous… where local governments are non-cooperative, but response systems can be set up in parallel to local government systems; and it’s standardized, but doesn’t always leave room for supporting the dignity of individual recipients.” In other words, the humanitarian system performs well in response to a sudden humanitarian crisis, but has challenges in performing satisfactorily over the longer-term.

Building on this observation for Jordan, Callan pointed out how from 2013 onwards, there “was a growing humanitarian response that was primarily focused on refugees and… a sense of competition began to set in between what the humanitarians were doing versus Jordan’s long term development needs.” A gap emerged, in which humanitarians were not responding to the long-term needs of either refugees or host communities. Likewise, development actors were not prepared to address these needs as they were viewed as humanitarian in nature. As a result, Canada promoted a resilience building approach. Callan described a resilience approach as “responding to crisis through local systems and structures.” What was needed, he argued, was, “more of a developmental approach, partnering with the government, but done with a sense of humanitarian urgency.”

In the Q&A session, several questions were directed at the panel by the audience. These included the level of mobility refugees are allowed when moving in and out of camps; Israel’s contribution—if any—to the humanitarian response; methods for monitoring integrity when using a resilience approach and working through government systems; and which USG organization has the authority to approve OFDA involvement in a crisis and allocate funds.

An initial question, however, challenged the panelist’s perspective that Jordan was working to open employment to Syrian refugees. The audience member stated, “even though, in theory, refugees have the right to work, in practice this is not occurring. Most refugees, outside of camps, have great difficulty in obtaining work permits and are working under the table, and being exploited. How do you react to that?” Callan explained this is an extremely sensitive issue. As late as 2014, the Jordanian government wasn’t willing to employ Syrians. He went on to explain, “the government launched a Compact—an exchange with the international community. They said, we will let some Syrians work, but we want access to concessional rate financing… we want trade access issues with the EU resolved… they also asked that a greater portion of their resilience needs, as opposed to their humanitarian needs, receive donor funding.” These prerequisites have only recently been met and, to date, only 40,000 work permits have been issued to Syrians. Callen added that one method that the Jordanian government had utilized to avoid stoking tensions with the Jordanian public was to provide work opportunities to Syrians in sectors typically undertaken by foreign labor.

Adlparvar directed a question at Callan, asking to what extent he felt the balance between humanitarian and developmental—or resilience building—aid had been struck in Jordan. Callan felt that Jordan represented a scenario in which the balance had been well struck. “Whether it’s a development dollar or a humanitarian dollar, it doesn’t matter. It’s the approach that does; if you can leave something behind… then do,” he concluded.

Finally, an audience member asked Allen if the current global approach on responding to humanitarian crises was moving away from the use of camps. He responded by saying, “If you look at refugee response writ large, that is a trend that’s happening. It’s less of an agency-led policy decision, and more of us recognizing the reality, and forcing ourselves to come to terms with that reality whether we like it or not.”

Written by Naysan Adlparvar, Postdoctoral Fellow and Lecturer at the Council on Middle East Studies at the MacMillan Center at Yale.