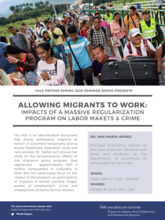 Dr. Ana María Ibáñez studies the socioeconomic impacts of the PEP program—a large scale program that regularized approximately half a million Venezuelan forced migrants in Colombia in August of 2018. To examine the effects of the program, Dr. Ibáñez uses municipal-monthly data and a difference-in-difference methodology which compares municipalities with different shares of early settlements of Venezuelan nationals in Colombia (those observed in 1993, before the Venezuelan crisis onset) before and after the PEP program implementation. She finds that granting work permits has allowed migrants to participate in formal markets increasing their returns and quality of employment. However, the migrant’s integration is coupled with lower wages and hours worked, as well as higher unemployment for native formal workers. She also observes positive effects of the program on self-employment for natives. She is not able to identify any significant short run impacts of the program on crime.

Dr. Ana María Ibáñez is a Principal Economics Advisor at the Inter-American Development Bank (IDB) and a Professor at the School of Economics in Universidad de los Andes. She is the former Dean of the School of Economics at Universidad de los Andes and the Director of the research center (CEDE). She studies forced displacement and migration in Colombia and other countries. Her research on forced displacement started in 1999 and has addressed the relation between forced migration and violence, and the consequences of forced migration for migrants and host communities. She also studies the economic consequences of internal conflict and currently the effects of non-state armed group governance on post conflict settings. Professor Ibáñez has worked with the Colombian Government to support the design of policy to assist the internally displaced population, the implementation of land restitution programs for internally displaced, and the peace negotiation process with FARC. One of her current projects analyzes the impact on migrants and host communities of a massive regularization program of Venezuelan migrants in Colombia. She was a member of the Advisory Group of the United Nations Peace Building Fund and the Global Commission on Poverty. She has been a Visiting Professor at the Yale MacMillan Center in 2016 and the Program of Latin American studies at Princeton University in 2018.