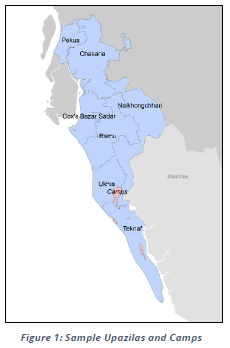 The Cox’s Bazar Panel survey is a comprehensive dataset representative of the displaced Rohingya and host communities.

The Cox’s Bazar Panel Survey (CBPS) is a comprehensive panel dataset tracking social, economic, and health outcomes from a representative sample of recently arrived Rohingya (displaced after August 2017), and Bangladeshi households residing in close proximity to the refugee camps in Cox’s Bazar and Bandarban. The first wave of data was collected in partnership with Yale University researchers and researchers at World Bank and the Gender and Adolescence: Global Evidence project (GAGE). Data collection for the first wave of CBPS was conducted by Innovations for Poverty Action (IPA) Bangladesh between March and August 2019.

The design of the Cox’s Bazar Panel survey is useful for practitioners and policymakers to understand the existing landscape, to monitor indicators and prioritize programming, and to design evaluations of future programs.

In order to carry out the first wave of the survey, IPA first conducted a census of 45,916 households, equally divided between Rohingya and host communities, and randomly selected 5,020 households to implement the in-depth survey.

This design allows for the data to be used for three objectives: