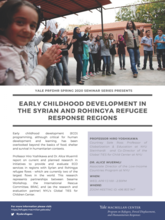 The Syrian and Rohingya refugee flows are currently two of the largest in the world. The majority of the Syrian migration is to other countries in the Middle East, while the majority of the Rohingya migration from Myanmar has been to the Cox’s Bazar area of Bangladesh. Early childhood development (ECD) programming, although critical for human development and learning, has been overlooked beyond the basics of food, shelter and survival in humanitarian contexts. Professor Hiro Yoshikawa and Dr. Alice Wuermli report on current and planned research in initiatives to provide and evaluate ECD services in these regions, representing partnerships between Sesame Workshop, the International Rescue Committee, BRAC, and (as the research and evaluation partner) NYU’s Global TIES for Children Center.

Professor Yoshikawa the Courtney Sale Ross Professor of Globalization and Education at NYU Steinhardt and a University Professor at NYU, and Co-Director (with J. Lawrence Aber) of the Global TIES for Children center at NYU. He is a core faculty member of the Psychology of Social Intervention and Human Development and Social Intervention programs at Steinhardt. He is also a faculty affiliate of the Metropolitan Center for Equity and the Transformation of Schools and the Institute of Human Development and Social Change at NYU. He is a community and developmental psychologist who studies the effects of public policies and programs related to immigration, early childhood, and poverty reduction on children’s development. He conducts research in the United States and in low and middle-income countries. He has also conducted research on culture, sexuality and youth and young adult development in the contexts of HIV / AIDS risk and prevention and is currently conducting research on GSAs (gender and sexuality alliances) in Massachusetts with Paul Poteat, Jerel Calzo, and others. His current projects also include leading the research and evaluation for the MacArthur Foundation 100&Change and Lego Foundation funded partnerships of Sesame Workshop with the International Rescue Committee and BRAC to provide early childhood programming for Syrian refugee families in the Middle East and Rohingya refugee families in Bangladesh (with Alice Wuermli); the first experimental evaluation of an unconditional cash transfer for families with young children in the United States (with Greg Duncan, Kimberly Noble, Lisa Gennetian, Katherine Magnuson, and Nathan Fox); and the Listening Project, a Spencer Foundation funded project evaluating a middle-school-based intervention in New York City schools to train students and teachers in transformative curiosity (interviewing and listening), with Niobe Way, Joseph Nelson, Alisha Ali and David Kirkland. His recent books include Cradle to Kindergarten: A New Plan to Combat Inequality (with Ajay Chaudry, Taryn Morrissey, and Christina Weiland, 2017, Russell Sage) and Immigrants Raising Citizens: Undocumented Parents and Their Young Children (2011, Russell Sage).
Dr Alice Wuermli is the Associate Director of the Low-Income countries Program at NYU. Her research focuses on socioeconomically disadvantaged children in low- and middle-income countries (LMIC) and humanitarian contexts. Her research straddles the gap between basic and applied developmental science in order to reveal the underlying developmental processes that lead to observed child and youth outcomes. Alice’s particular interests pertain to how various systems involved in the stress response and contexts interact dynamically to produce observed differences in health, learning, and psychosocial functioning from conception through adulthood, the buffering effects of early caregiver-child relationships on both child and mother particularly for adolescent mothers. Alice is the co-I and co-PI on the two recently awarded 100 million dollar initiatives funded by MacArthur and Lego Foundations in partnership with Sesame Workshop, the International Rescue Committee, and BRAC to improve early childhood development in humanitarian contexts. From 2009 to 2012 Alice worked at the World Bank and joined Global TIES in early 2014 as the Associate Director for Program in Low-Income Countries. Alice holds a PhD in Human Development from the University of California, Davis; a MA in International Development/Development Economics from American University in Washington, DC; and a BA in International Affairs and Governance from the University of St. Gallen, in Switzerland.