The Arab Revolts are “not a finished story” 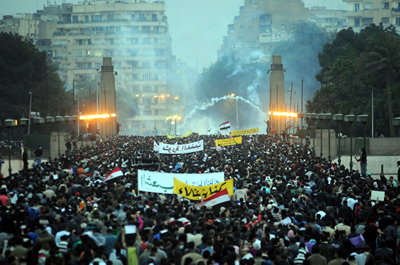 Coinciding with the sixth anniversary of the outbreak of revolts in the Arab region, the MacMillan Center hosted a panel discussion (view video) featuring Amr Hamzawy, Senior Fellow at the Carnegie Endowment for International Peace; Jonathan Wyrtzen, Associate Professor of Sociology, History, and International Affairs; and Robert Malley, Former Special Assistant to the U.S. President and White House Coordinator for the Middle East, North Africa, and the Gulf Region.

Wyrtzen started the panel with a holistic analysis of the events of the Arab revolts “that took everybody off guard.” The Arab region that was regarded by analysts to be stagnate was suddenly witnessing the fall of a dictator every month. Wrytzen highlighted the significance of the transnational dimension that took the spark of the revolts from one country to another, after the fall of the Ben-Ali regime in Tunisia in January 2011. The results, however, differed in their patterns. While in some countries, such as Egypt, the overall authoritarian structure remained intact, in other countries, such as Libya and Yemen, state structures witnessed a complete breakdown. Wrytzen compared the current events unfolding in the Arab region since 2011 to the period of 1911-1931 in the history of the region. Both periods represent a juncture in which the regional regime is hit by a shock that changed its structure.

Hamzawy on the other hand, downplayed the significance of the transnational dimension of the Arab revolts. Because there is so little in common between state structures in Egypt and Tunisia, for example, more focus should be given to the homegrown respective locality of each country that witnessed a revolution or an uprising, and to the historical legacies of each case, rather than dealing with the revolts from a regional angel as a single interdependent phenomenon. Hamzawy also stressed that the events of the Arab revolts continue to unfold; “this is not a finished story, it continues to happen,” and thus it is not necessarily valid that academics have much to say in their endeavors to theorize it. Hamzawy then focused his intervention on the case of Egypt, highlighting how the civil-military relations, and the role of the state bureaucracy in Egypt were the main factors that lead to restoring the status-quo. However, that did not mean that the outcome – the defeat of the forces of change – was pre-determined. There was a remarkable political opening, and had the forces of the revolution been able to extend that brief opening, things would have unfolded in a different way. Hamzawy, who was a member of parliament in 2011, also contested the “novelty” of the 2011 moment. He said that since 2004 there has been a rise in social activism in Egypt that built up to that moment. Also, there were other moments in post 1952 Egypt that represented moments of revolt during which state authorities lost control, even for a couple of days; namely the bread riots of 1977, and the rebellion of central security conscripts of 1986. “This was not a silent society that woke up in 2011,” he said.

Robert Malley spoke about how the U.S. responded to the unfolding events during that unique period in the history of the region. He mentioned that while the general criticism has been that the U.S. was reluctant to invest in the region, he was of the view that it has been over-invested in the region. Citing former President Obama’s view that there should be a disengagement from a certain pattern of involvement in the Middle East, Malley believed it might have backlashed in certain cases. While the administration made a decision of not intervening in Syria, for example, some of its statements and policy actions might have resulted in perpetuating the conflict.

Written by Hanan Elbadawi, Program Manager for the Program on Refugees, Forced Displacement and Humanitarian Responses at the MacMillan Center at Yale.