‘Coming to Connecticut’ will explore complexities of resettling refugees 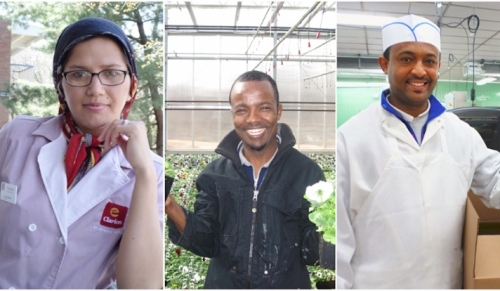 Refugees from war-torn regions around the world are coming to Connecticut in growing numbers, bringing with them new languages, customs, and cultures.

The public is invited to attend a policy forum on the issue of welcoming refugees to Connecticut and on our country’s response to the world’s refugee crisis. “Coming to Connecticut: A Conversation on Economic and Legal Issues of Resettling Refugees” will be held on Wednesday, June 28, 7:30-9:30 p.m. at the MacMillan Center’s Henry R. Luce Hall Auditorium, 34 Hillhouse Ave. To attend, register here by June 26.

“Throughout our history, Americans have been challenged by the call to welcome the ‘huddled masses yearning to breathe free,’” write the event organizers. “This current generation of refugees is no exception. It is a fact that many of our communities, along with our nation, are struggling with the social, legal, economic, and political complexities of today’s refugees.”

The event is sponsored by the Program on Refugees, Forced Displacement, and Humanitarian Responses at Yale’s MacMillan Center and Beacon & Main, a grassroots, issue advocacy group that strives to advance the well-being of our diverse communities and ensure a healthy environment for businesses.

At the forum, Connecticut Governor Dannel Malloy and some of the nation’s foremost experts on the practice, policy, and economics of resettling refugees will:

Dannel P. Malloy, now in his second term as governor of Connecticut, received the John F. Kennedy Profile in Courage Award from the John F. Kennedy Library Foundation for his defense of the U.S. resettlement of Syrian refugees amid security concerns following the November 2015 terrorist attacks in Paris and personally welcoming a family of Syrian refugees to New Haven after they had been turned away by another state.

Becca Heller is the director and co-founder of the International Refugee Assistance Project (IRAP). She is a visiting clinical lecturer in law at Yale Law School, and a leading expert in refugee law and policy. IRAP is involved in legal action against President Trump’s Muslim ban executive orders.

Justin Cox is a staff attorney for the National Immigration Law Center (NILC). He has litigated cases involving unlawful immigration raids and unconstitutional and anti-immigrant state laws, and is currently involved in legal action against President Trump’s Muslim-ban executive orders. Prior to joining NILC, Cox was a staff attorney with the ACLU Immigrants’ Rights Project.

Chris George is the executive director of the nonprofit IRIS-Integrated Refugee & Immigrant Services, the New Haven-based refugee resettlement agency that welcomed 530 refugees to towns throughout Connecticut last year. He has 30 years of experience working with refugees primarily in the Middle East.

Mushfiq Mobarak is a development economist and a professor in Yale’s School of Management and Department of Economics. He studies the causes and consequences of migration, and will speak about the effects of immigrants on the economy.

Bushra Mahdi came to the United States as a refugee from Iraq in 2014, along with her husband, Shakir, and their four children. In Baghdad, Mahdi operated her own business as a clothing designer before she and her family were forced to flee to Jordan. After arriving in Connecticut, she focused on learning English as she worked with New Haven tailors and designers until she opened her own business again: Bushra Designs.

Dita Bhargava, who will moderate the event, is the vice chair of the Connecticut Democratic Party and a founding board member of Beacon & Main. Bhargava spent over 20 years as a portfolio manager and trader in the financial industry. As the daughter of a single-immigrant mother, Bhargava has actively engaged in civic duty. Through her leadership in nonprofit organizations, she has helped to create cultural awareness, aid underserved communities, and promote gender parity.