Háwar – My Journey to Genocide 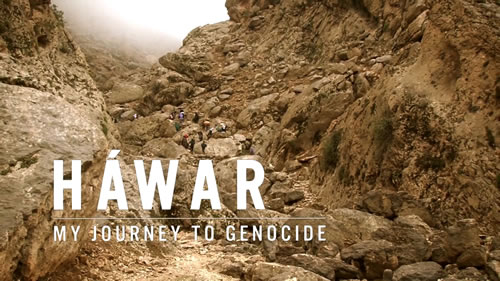 Join us for a screening of “Hawar – My Journey to Genocide,” followed by a discussion with renowned filmmaker Düzen Tekkal.

HÁWAR– My Journey to Genocide documents the genocide of the Yazidis, one of the world’s oldest religious communities. In August 2014, the Islamic State attacked their towns and villages in northern Iraq, leaving 5,000 dead, half a million displaced and 3,000 girls and women forced into sexual enslavement. The film records the journey of German Yazidi journalist Düzen Tekkal and her father to explore the family’s Yazidi roots, a trip that becomes an odyssey to chronicle the genocide as it unfolds. The film demonstrates Yazidi resistance – armed, political, and spiritual – as well as the violence.

About the speaker: Düzen Tekkal is an award-winning German journalist and human rights activist of Kurdish-Yazidi origin and current chairwoman of HAWAR.help.

Quotes from the film:

“The IS terrorists ordered us to stand in a row one behind the other. I then recited my profession to my Yazidi faith and lay down on the ground. Then they shot at us. When they opened fire a bullet hit me in the neck.” (Miran, Yazidi survivor)

“I speak here in the name of humanity. Save us! Mr. Chairman, we demand that the Iraqi parliament intervene immediately and stop this massacre.” (Vian Dakhil, Yazidi member of Iraqi parliament)

“At the beginning of the week, a young Iraqi woman shouted out to the world that no one was coming to help. Well, today America is coming to help.” (Barack Obama, President of the United States)

Sponsored by The Whitney and Betty MacMillan Center for International and Area Studies at Yale; Yale Law School; the Orville H. Schell, Jr. Center for International Human Rights; the Women’s, Gender, & Sexuality Studies Program at Yale; and the Council on Middle East Studies; Order, Conflict, and Violence Program; Genocide Studies Program; and the Program on Refugees, Forced Displacement, and Humanitarian Response at the MacMillan Center.