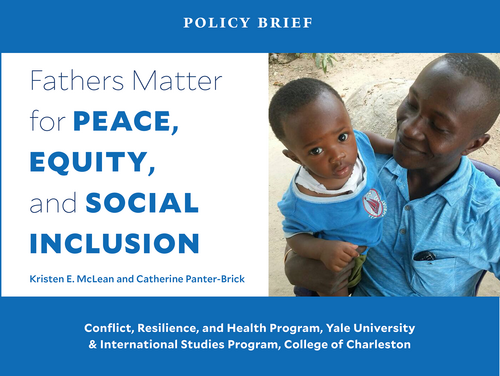 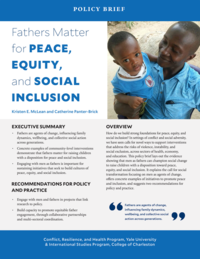 How do we build strong foundations for peace, equity, and social inclusion? In settings of conflict and social adversity, we have seen calls for novel ways to support interventions that address the risks of violence, instability, and social exclusion, across sectors of health, economy, and education. This policy brief lays out the evidence showing that men as fathers can champion social change to raise children with a disposition toward peace, equity, and social inclusion. It explains the call for social transformation focusing on men as agents of change, offers concrete examples of initiatives to promote peace and inclusion, and suggests two recommendations for policy and practice.

A culture of peace and social inclusion

In 1999, the United Nations General Assembly adopted a landmark, norm-setting resolution, entitled the ‘Declaration and Program of Action on a Culture of Peace’ (UN Resolution A/RES/53/243). This Declaration intended to guide governments, international organizations, civil society, and individuals to promote a culture of peace in the new millennium. It posited that traditional ways of addressing conflict—via mediation, humanitarian intervention, or diplomacy—were insufficient to creating lasting peace, and rested on the premise that peace is based upon the intellectual and moral solidarity of humankind. To achieve a culture of peace, however, requires widespread societal and structural change, including a shift of values and behaviors, the elimination of inequality, and the promotion of tolerance and solidarity.1
Responding to this call to invest in cultures of peace, many scholars, practitioners, and social activists have sought to consolidate evidence that programs investing in early childhood development (ECD) are key to raising the next generation with a disposition toward peace, empathy, and global citizenship. Such evidence—from fields spanning biophysiology to peacebuilding—emphasizes the importance of working at the level of families and communities to build harmonious and equitable relations across generations.2  Investing in ECD benefits not only children, by promoting their ability to interact in non-violent and prosocial ways, but also has cascading effects for the wider societies in which they live.1,3
Thus, a critical strength of ECD programming is a transformative potential to build social cohesion across generations and within diverse communities.1  Programs can be leveraged, for instance, to engage diverse sociocultural, ethnic, or religious identity groups in joint efforts to build social capital and social change.4,5 The call to invest in cultures of peace can therefore be extended to a call to invest in social inclusion, since addressing the root causes of violence and conflict—economic inequalities and social injustices rooted in gender, ethnic, or other forms of discrimination—can help promote peace, tolerance, and inclusivity for all.2,6
Working with families to invest in the next generation, however, does not mean focusing exclusively on mothers and the mother-child dyadic relationship, since fathers have a very significant influence on the physical and social development of children and adolescents, while grandparents and other caregivers also provide substantial resources to help with raising children and promoting cognitive, social, and other skills.7,8 Nor does it entail focusing exclusively on programs in the early years of life, since adolescent education, growth, and development are also critical to sustained social change.9-11 Finally, it does not entail a narrow understanding of what constitutes a family, as diversity in family structures is evident and becoming increasingly recognized.2  Social transformations in the wake of new crises, policies, programs, or grassroot initiatives require innovation, leadership, and changes in structural, cultural, and/or behavioral practices. Relying on men as fathers, rather than exclusively targeting female caregivers to influence family dynamics, wellbeing, and collective social action, is a novel and effective strategy to work for peace, equity, and social inclusion, one that promises to have lasting and cross-generational impact.
Research in post-conflict Sierra Leone,12 for example, found that many fathers were engaged in supportive and emotional relationships with their children, and working to instill values of peace, empathy, and respect for others. In contrast to the rhetoric that depicts such men as violent and oppressive, this work suggests that many men are leaning toward caring masculinities, working to promote gender equity even as they themselves contend with racial, economic, and cultural inequalities.13 The organization Promundo, in partnership with Sonke Gender Justice, has made great strides in promoting men’s involvement as equitable, non-violent caregivers through their global fatherhood campaign, MenCare.14 Other organizations, such as Fathers Incorporated,15 promote father engagement in the lives of children, with an explicit focus on social justice.
Read the fully downloadable policy brief “Fathers matter for peace, equity, and social inclusion.
By Kristen E. McLean and Catherine Panter-Brick